EIAF was privileged to fly five potential Melbourne Cup runners from Melbourne to Auckland on behalf of leading trainer Graeme Rogerson. With an eye on adding a second Group 1 Melbourne Cup to his mantle alongside Efficient’s win 11 years ago, Rogerson is investing heavily in the world’s greatest staying race with his recent acquisitions. After securing the opportunity to buy ready-made stayers from Cup specialist, Macedon Lodge’s Lloyd Williams, the new stable mates will also provide a significant boost to the New Zealand racing economy. “We flew to Melbourne and spent the day with Lloyd at Mount Macedon,” Rogerson said. “We’ve bought five horses off Lloyd and we think this will be a great lift for New Zealand racing.”

The five horses joining Rogerson Racing Stables include crowd favourite, Group 1 winner Gallante. A runner in the 2016 & 2017 Melbourne Cups, the seven-year-old gelding has earned more than $A2 million from just 20 starts. Rogerson is planning on starting Gallante in the Group 2 Awapuni Gold Cup, before targeting the seasoned campaigner towards the $2 million Group 1 Sydney Cup.

While Makybe Diva’s son Surrey has certainly hit the ground running for his new stable, having impressed in his debut maiden victory over a mile at Matamata, he gave a solid runner-up effort at Te Rapa from an unfavourable barrier. “The dream is the first Tuesday in November, and I think he’s a Cup horse in the making. I’m just going to give him two more starts and then give him a break and come back in the spring and see if we can get him over there and make a challenge,” Rogerson enthused about the patiently handled five-year-old. The other purchases included proven galloper, Assign, a 2016 Melbourne Cup runner and Group 2 Herbert Power Stakes winner, Pattern, a Flemington winning son of High Chaparral, and the Galileo sired, My Bantry Bay. EIAF look forward to Rogerson Racing returning with a strong team in the spring. 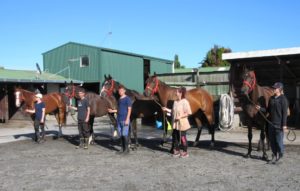 Packing gear for a flight